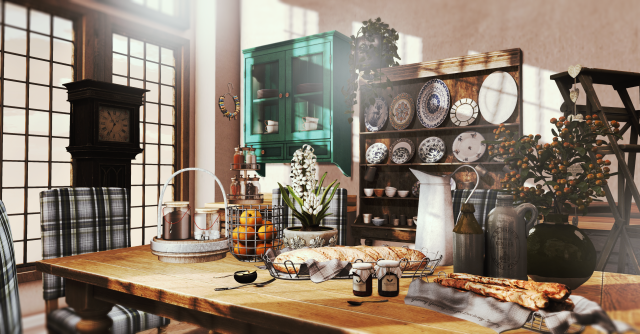 Good morning!  Not much time to talk these days, but I’ll do my best to give you some information today.  I’m showcasing items from this months crate from Deco(c)rate, which you can still grab for a slightly higher fee. The Dublin old shelf is just gorgeous and comes in two tones.  The dining set by Void is another excellent piece of furniture that warms up any room with these plaid chairs.  It’s also time to pre-order the coming month’s crate now to get it at a 50% discount.  The theme is “Whatever the Weather.”  Just visit the Deco(c)rate website for more information and to grab the landmarks for all the places you can pre-order.

I’m also showing the kitchen goodies that [Merak] made for this initial opening of the Illuminate Event that features home and garden products. The rest of the items shown are listed below in credits. 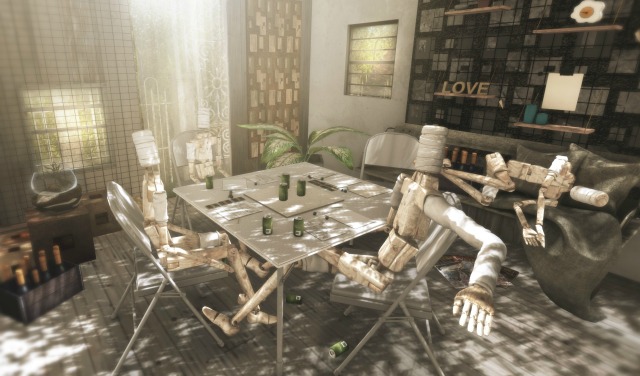 I’m participating in the Geeks ‘n’ Nerds Fair this year.  It’s set to open the doors in a few days on October 22nd.  It has a bit of everything for you to get your geekiness or nerdiest on.

Today I am showing a game master table with chairs and accessories set by Fiasco. The set comes with a decorated version set up as well as the individual pieces that you could use on their own or create your own game setup.  The table with decorated game has a land impact of 5 with chairs being 2 and other individual games pieces with 1. The event will be open until November 5th. The poster below does not have the correct dates, as the event was pushed back as a result of Hurricane Mathew.

I’m also showing wall cubes in orange and black, the black planter and cube display decor pieces by ChiC buildings, available now at On9.  This set is available in both black and orange at the event.  I’m showing also a decor piece by ::New Church::, which is the TERRORium, called the Tree of Sorrow that sits on the cubes in the corner.

The vintage lovecraft comics on the floor are by [noctis] and available at Genre currently.  The grid stander on the wall with the decor and other near the curtain wall is by Elysium and available at Totally Top Shelf. The last item being featured is the rustic bench, a collaboration between Shutter Field and Decor Junction. All great decor pieces for your decorating needs.

Have a great Thursday!

He said, “You are sweet and bad at the same time.”

I really loved this table and chair set that [noctis] created for The Fantasy Collective, because it reminds me of the furniture from some of my border trips to Mexico.  I call them border trips as they were only visits that didn’t venture beyond a couple of cities from the border line.  My very first trip was while visiting San Diego, California and crossing over the bridge to Mexico through Tijuana.  I will never forget that trip as it was heart wrenching to see little children no more than 5 years of age panhandling for money.  Another border trip was through Hidalgo, Texas when I was actually in Fort Worth and our party made the jaunt to McAllen and then on to Mexico.

It’s a pity that now those trips across the border are not considered the most safe, but who knows what the future brings.

Pose: Reluctance to Walk by Del May

On Flickr earlier I saw a post with a statement letting men and women alike know they were not in SL for a relationship or to talk about their real life… so basically stop trying to come on to them.  I guess someone might take the time to read through your profile and then go on their browser to get to your Flickr and scroll through all the pictures and hopefully come upon that post before instant messaging you.  Maybe.

In the four years that I’ve been in Second Life I have had my share of both sexes also come on to me.  I can’t say that’s been the case in the last year or so at least not in a reoccurring basis and perhaps it’s because I spend a majority of my time just attending shopping events and on my own land.

Though in the last week I’ve had at least two incidents that were not in the most pleasant manner.  The first was at a store on a moderate sim while I was waiting for the building and vendor to completely rez when I get a message “hi sexy slut,” which took me by surprise.  I choose to ignore it as opposed to enter into any type of chat with this moron.  I ended up crashing and logged back in at home to find a new message with an invitation to join this person at some mature island.  To say the least not a compliment.

The second was at a shopping event and someone said hello.  I was not in the mood for idle conversation and so I choose not to respond, hoping if I didn’t reply the person would deem that I was not interested in chat and move on.  I know it takes courage for someone to reach out to you to just even to say hello and generally I am never rude to ignore anyone when they’re just being friendly.  I closed the box and continued to scan around the event location when another message pops up from the same person with a… “you have a nice chest.”  I literally rolled my eyes knowing full well that my assets were covered and closed the message box and went home.

In either of those situations I can’t imagine any woman responding to that in a positive way much less feeling they’ve been complimented.

So I hope that very public statement does the trick, because both parties failed to look at my profile pick where it says I’m not easily impressed and I’m not available.

“Fear makes the wolf bigger than he is.” ~ German Proverb

I’m at my work desk taking a small break to write this post and moving to the song “Demons” by Imagine Dragons as I had just finished reading a fellow bloggers post, which contained the video to this song.  I love the tune of that song and another great tune that I favor these days is “Take me to Church” by Hozier.   They just suit the mood lately and I’m a sort of laughing right now as I realize the coincidental pairing of both titles.

Maybe I’ll just leave this with a quote…. “Throw me to the wolves, and I’ll return leading the pack.”

Enjoy the rest of your Thursday!

Pose: We Be Friends by EinK {Half of Pose}