Greetings everyone.  It’s a short one today as I have a growing list of things to do today and half the day is already gone. Take a look at credits below to find out where everything shown can be found. 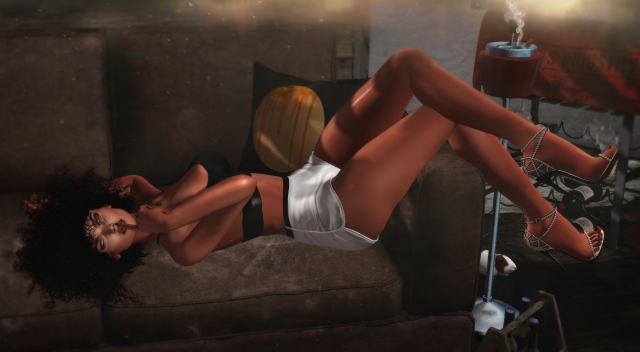 If you’re still holding on to the summer season then you’re really going to like this new gacha set by Concept} called Bali at the new round of Kustom9 that began yesterday.  There are 15 pieces in the set with 3 being rare and all 100% mesh.

I’m also wearing a new hairstyle by Iconic available at Tres Chic.  It’s rigged mesh with a hud that gives you the option of wearing the hair in different styles.  It’s a great new feature that some hair designers are now offering.  The top and shorts are by Scandalize and are at this round of Cosmopolitan. There are 22 color options available with two versions included in each.

Last item being featured is the chubby cat with the birds on top by Jian.  It’s only available in September’s Luxe Box, so you’ll have to visit their website to find out how you can purchase the subscription box. 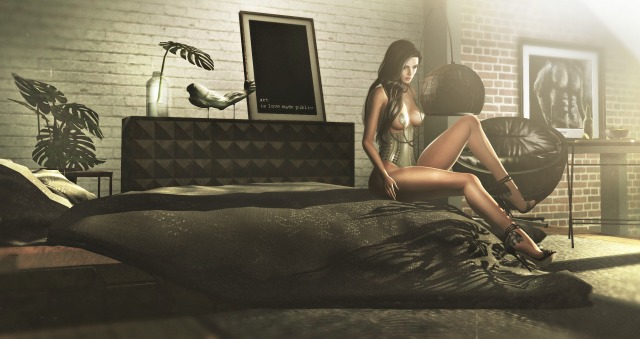 I’ve been up since very early this morning and out of the house for most of the morning and was highly tempted to get back in bed and sleep a few more hours once I got back home. Though posting won out so here you have me.  It’s a mixture of fashion and decor with my first picture as I’m wearing lingerie by VoluptasVirtualis that is available at Romp.  The sexy heels are by Empire and can be found at Collabor and a new hair release by Iconic available now at On9.

The furniture being showcased is by 22769 and it’s the minimalist set at Romp. You can find all the items from the set listed below in credits. The loft skybox is by Newchurch and it’s part of this month subscription for Builder’s Box.  The last two pictures hopefully gives you a good view of how roomy and detailed the skybox is. 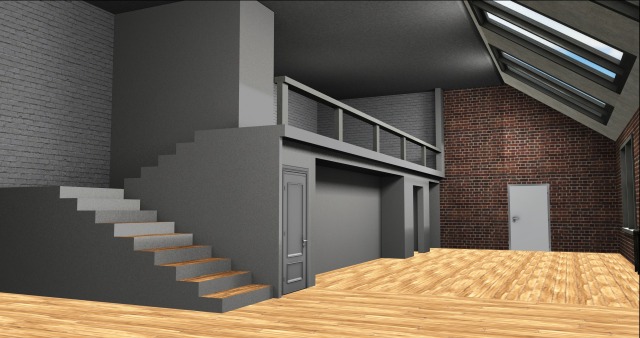 Hope you have a wonderful Saturday or what remains of it!! 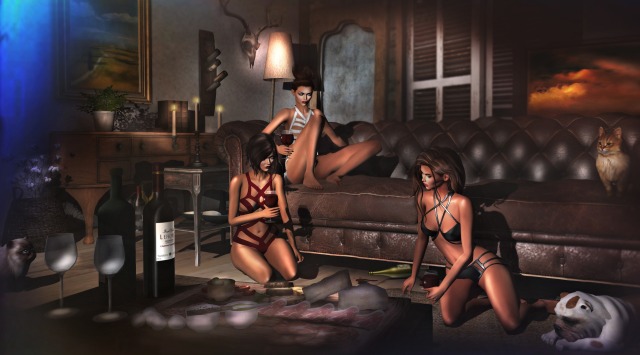 This picture was born out of the request from a creator if we could include avatars in the blog post using their decor — to see some form of emotion, tension or message that creates a story that others can identify with.  Most often than not I don’t like to pose myself in decor pictures, because I want the focus to be on the decor and not myself unless I am also showcasing fashion.

Though it was a reasonable request that I felt that I could manage and since I had some sexy pieces of lingerie that I needed to also blog the idea for me, myself and I came to fruition.  The decor is the club sofa set by N4RS available now at FaMESHed, which is made up of the brown sofa, decorative table beside it with the candle and rug.  The black lingerie is by V/. VoluptasVirtualis and it’s at the Crystal Heart Festival with the hair I’m wearing by No.Match at The Liaison Collaborative. The scarlet harness set is by The Forge and this is at the recently open new round of The Fantasy Collective.

Enjoy the rest of your day!

*Harley Harness, Scarlet by [The Forge] @ The Fantasy Collective
Hair: Gin A by eXxEsS
Pose: Used pose from Concept} 04. Alquer Pouf by Concept}

Today’s scene is all about summer and being at the beach. Again, I am showcasing items from several events around the grid starting with some fashion and decor at Cosmopolitan, which this round ends on the 15th.  I’m wearing bikini tops and bottoms by Avale and my guy here is wearing baggy jeans rolled up into shorts by A&D Clothing. The good vibes print frame is by Calm and made for a good title as well.

Hair Fair is still ongoing and ends on the 16th and remember this event supports the Wigs for Kids, so if you’re able to purchase more hair. Many creators also left gifts and I’m wearing the gift by Iconic, so make sure you grabs your gift too!

The Liaison Collaborative ends July 30th, and Ariskea is participating with this beach hut. Another event that is ongoing right now is The Gacha Guardians that ends at the end of the month. I’m showing gacha items by Lagom, the rare house in the background and then some beach decor accessories around me.

Jian is participating in this month of FaMESHed with this pupper pool party that comes with two animated pugs in floaters drifting and spinning in the pool. Is that cuteness or what?

Then I’m also featuring items by Anhelo, which are not new but fantastic decor items for the summer season.  The car is decor only and comes with various fun poses as is the beach set of parasol and chairs.  It’s at their main store and comes in various colors.

Hope it’s been a fabulous day for you all!!

Hello everyone and a Happy 4th of July for those in America!!  I’m going to go straight into what I’m featuring without delay. I’m wearing new skin called Sophie by Belleza made for Catwa and it was modeled in Catya mesh head except I’m wearing it with Tumble. Sophie is available in 7 skin tones and includes coordinating base skin, 5 brows option, 5 eye makeups, 5 lipsticks, blush and freckles. It’s out at the main store.  Belleza also just released a new set of eyeliners to go with Sophie, there are like 12 options in the pack that I’m wearing. There is also a make-up add on set available as well.  You can find both at Summerfest.  Since I did a bit more editing on the first picture I included a second photo to give a clear shot of the skin and makeup as well as the hair that I’m also featuring.

The hair is another new release by Iconic at the Hair Fair.  Denae is available in several color options and materials ready. I’ll be showing one more new release and the gift in the coming days as the event ends on July 16th.

The blue and white top and bottoms are by The Annex, who was having a 4th of July sale at the store on some of there red, blue and white items. I didn’t get an opportunity to check if it was over, but worth checking out as items in these colors were $50L.  The shoes are from Empire called Quince. I don’t have any details just now other than coming soon, and as always with all of Empire’s shoes you get a lot of color options via a hud.

The last items are some of the decor pieces used, which are from 22769 that are available at The Gacha Guardians.  The dock is a rare in the set, and the bag, cooler box and beach clutter next to me are all commons.

Enjoy the rest of this holiday day!

Seagull Eating by O.M.E.N
Tourist Binoculars – Decorative by (NO)

Happy Saturday afternoon!!  I’m starting off my weekend with a headache, which is not a fun way to begin though I’m hoping by the next few hours it’s all gone. Today’s post is a collaboration with friend and fellow blogger Lotus Mastroianni. I give her all the credit for building the set even arranging all the items that I put down for us to use. 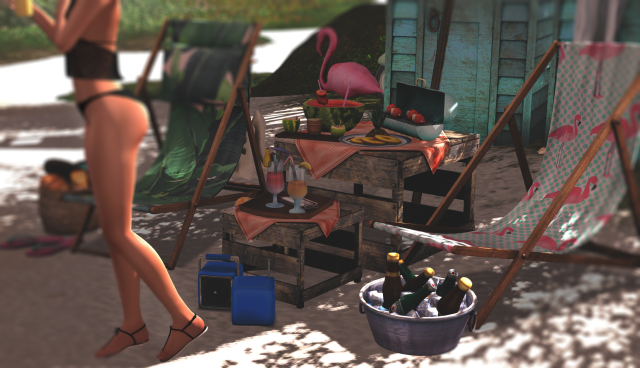 It’s all about summer in this post starting with this adorable short hair style by Iconic called Mae, which is a new release at Hair Fair.  I grew up with a short hair style practically until I was 20 and then I started to let it grow out so I sort of have a soft spot for short hairs.  I’ll be showing you some more great hair styles by Iconic at the Hair Fair in some of my upcoming posts.

The clothes I’m wearing is by Justice and it’s from their Liv gacha outfit at the newest summer round of The Gacha Guardians.  The bubble gum scoops ice cream that I’m enjoying is by RazzBerry Inc., also at gacha event. My cute summery shoes are by Empire and these come in the various sizes to fit most mesh feet, but what I love is that they come also in toddleedoo sizes and are available at the Toddleedoo Fair.

Other decor is listed below, but all great summer finds at various events around the grid.  Please visit Lotus’ blog “Dressed like it-girls” to get the credits of what she is wearing and pose she is using.